Cranberry Township is a Progressive Municipality that works to maintain traffic efficiency on its transportation networks. Cranberry Township’s unique geographical location at the junction of Interstates 79 and 376 (PA Turnpike) can pose interesting challenges in coordinated operations.
Specifically, the Township operates a Coordinated Signal System that relies on historically Generated Signal Timings, coupled with real time technology to manage day to day operations on the local network. Unfortunately, any scheduled or unscheduled events on the limited access highways can cause havoc with our efficient operation.

Together we are proposing to incorporate real time data inputs monitored from both social media and sensors from these limited access highways to trigger predictions of traffic delays. These predictions could then be directed to several directives, such as dynamic message boards, smart phone applications, social media and text messages, to alert the public of the anticipated delay. Those predictions also alert the Cranberry traffic system of the issue to allow for adjustments to the operating traffic plan on the real-time basis.

A CSX intermodal rail terminal is planned to open in late 2017 on a parcel of land located immediately north of the McKees Rocks Bridge in the Borough of McKees Rocks and Stowe Township, PA. The development will consist of an intermodal facility that will accommodate approximately 50,000 lifts per year opening year (2018) and 136,000 lifts per year at full buildout (2023). Access to the terminal is proposed via an improved Michael Alley to Island Avenue (SR 0051). It is expected to generate a significant number of trucks in the Borough of McKees Rocks, which adds additional burdens on the existing roadway in the Borough. The terminal may bring in heavy congestion to individual roadway drivers. A traffic impact study was conducted indicating a minor congestion increase with the new infrastructure. This research project conducts an in-depth analysis of the potential traffic impact in high temporal and spatial resolutions. Using the data collected in the traffic impact study along with other relevant data sets possessed by CMU Mobility Data Analytics Center, we simulate individual cars and trucks, and model their route choices, travel time and mixed traffic flow conditions. The result includes the travel time, travel delay, vehicle-mile-traveled and emissions for each road segment and intersection by time of day. We will also examine the effectiveness of potential traffic management strategies, specifically West Carson Street Extension and truck routing.

The effectiveness of traditional incident detection is often limited by sparse sensor coverage, and reporting incidents to emergency response systems is labor-intensive. We propose to mine tweet texts to extract incident information on both highways and arterials as an efficient and cost-effective alternative to existing data sources. This paper presents a methodology to crawl, process and filter tweets that are accessible by the public for free. Tweets are acquired from Twitter using the REST API in real time. The process of adaptive data acquisition establishes a dictionary of important keywords and their combinations that can imply traffic incidents (TI). A tweet is then mapped into a high dimensional binary vector in a feature space formed by the dictionary, and classified into either TI related or not. All the TI tweets are then geocoded to determine their locations, and further classified into one of the five incident categories.

We apply the methodology in two regions, the Pittsburgh and Philadelphia Metropolitan Areas. Overall, mining tweets holds great potentials to complement existing traffic incident data in a very cheap way. A small sample of tweets acquired from the Twitter API cover most of the incidents reported in the existing data set, and additional incidents can be identified through analyzing tweets text. Twitter also provides ample additional information with a reasonable coverage on arterials. A tweet that is related to TI and geocodable accounts for approximately 5% of all the acquired tweets. Of those geocodable TI tweets, 60–70% are posted by influential users (IU), namely public Twitter accounts mostly owned by public agencies and media, while the rest is contributed by individual users. There is more incident information provided by Twitter on weekends than on weekdays. Within the same day, both individuals and IUs tend to report incidents more frequently during the day time than at night, especially during traffic peak hours. Individual tweets are more likely to report incidents near the center of a city, and the volume of information significantly decays outwards from the center. 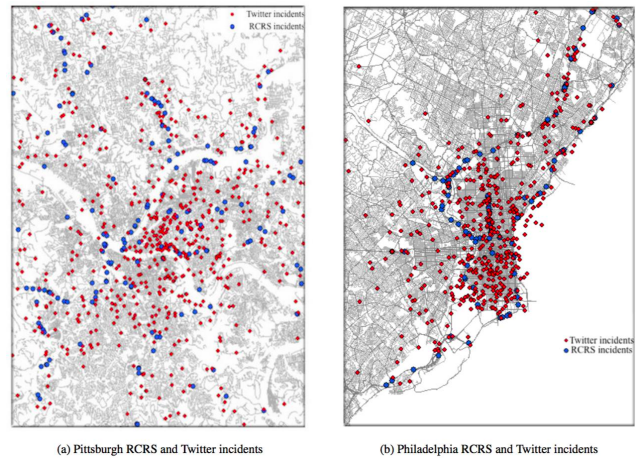